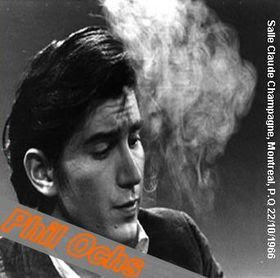 Here's a pretty great long bootleg of Ochs in Montreal, 1966. It's a great mix of songs from his first three albums, and the soon to be released Pleasures of the Harbor. It also notably features songs from Tape from California and Rehearsals ("Joe Hill," "Doesn't Lenny..."), as well as "Song of My Returning," which wouldn't be officially released until 80's on A Toast... Of course what makes Ochs' live recordings, both official and bootleg, worthwhile is his between song banter, as well as hearing the songs with expanded arrangements stripped down, this being no exception. Enjoy!

Thank you so much! I have been looking for this show for ages!

I've been listening to Phil for 20+ years now, and the thril of hearing "new" Phil is still there. I'm waiting with great anticipation for the new Documentary on DVD. He really was the "voice of the 60's"!

Wow it sucks this is down. Reupload please?

If anyone's still interested, I've just re-uploaded this excellent concert. With many thanks to the original uploader: http://www.megafileupload.com/en/file/523106/1966---Live-in-Montreal-zip.html

Could someone please re-upload this somewere as both links are now dead. Thanks

About this silly, silly blog

I created this mostly because I'm bored and spend far too much time on this infernal computing machine as it is. I love music, whether it be folk, punk, or folk-punk. Just kidding, i love most kinds of music. What kinds don't i like? Well maybe I'll post about that someday. but probably not


and although I intend to post mostly rare or not commercially available stuff, If I happen to post something that's available or by a band that is still active, for the love of god support the artist. buy the record, go to their shows, give them hugs and high fives.

I Happen to Like These Folks (pun lamely intended)